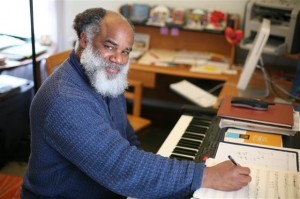 Awards include the “Academy Award in Music” from the American Academy of Arts  & Letters, a Fellowship from the Guggenheim Foundation, a Fellowship and an ASCAP Aaron Copland Scholarship.  He was also the winner of the inaugural National Black Arts Festival/Atlanta Symphony Orchestra Composition Competition.

Other grants have been awarded by the Ohio Arts Council, Meet the Composer, the Martha Baird Rockefeller Fund for Music Inc. , the ASCAP Foundation, and the University of California.

His music has been performed extensively, by major orchestras, soloists, and ensembles, both in the United States and abroad, including London, Paris, Helsinki, and Vienna. Recent and forthcoming performances include amid fleeting pockets of billowing radiance, by ‘cellist Christine Lamprea, in Chicago and Los Angeles, and in soft echoes  . . . a world awaits, by Sound Energy, this season, in Boston. Noted Italian pianist, Pina Napolitano will include his two Elliott Carter tributes in her European concerts this and next season, with plans to record them as part of a disc of American piano music.

Current projects include a new work for harp & percussion, for the Icelandic ensemble Duo Harpverk, becoming . . ., a new work for piano and nine instruments for Winston Choi and the Chicago based Fulcrum Point New Music Project, a new string quartet as part of an international consortium (including ensembles from London, Berlin, Stuttgart, Amsterdam, Copenhagen, Glasgow, Boston & New York), three windows, a new work for soprano, harp & ‘cello for Met Opera soprano, Alyson Cambridge, a ‘cello concerto in memory of Elliott Carter, for Christine Lamprea, a work for ‘cello & chamber Orchesatr for Deborah Pae, a duo for ‘alto saxophone & cello for Duo Denisov in Paris., and the ongoing set of rhapsodies for ‘cello & strings.“through a stillness brightening”.  In addition, a new 2 CD set of solo, chamber and ensemble works has just been released on the ALBANY Records label (TROY 1473/74).

His 2013 residency at the National Gallery of Art in Washington, D.C, included three concerts featuring his music as well as lectures at three area universities and his alma mater, the Sidwell Friends School. He was (2008) Composer-in Residence at the Alba (Italy) Music Festival and The Chamber Music Conference and Composers Forum of the East (Bennington, VT), and returned there this year. As well, his program notes (commissioned by the Boston Symphony and Tanglewood) for three works of Elliott Carter were published as part of a celebration of Mr. Carter’s music.

What the critics say:

”. . . has an unerring knack for fashioning rigorous works as changeable as cloudscapes, bursting with color, nuance and poetry”.

“ . . . a philosophy of music making that embraced both raw passion and a gentle imagistic poetry . . his pieces carry musical evocations of the effects he describes”

“ . . .  a composer who makes something mesmerizing and beautiful out of harmonic ambiguity . .   Compelling listening”

“ . . . a gracious use of instruments and a style of writing that is abstract yet attractively figurative”

“The harmonies are dense but never impenetrable, the orchestral colors are downright prismatic, the dissonances are aggressive and angular yet brimming with poetry and nuance.”

”The result is a piece that exults in frequent shifts of color and sharply delineated gestures, the violin unleashing silvery soprano-register lines that dovetail with shimmering pitched percussion and sostenuto brass and wind passages.”

“ . . . complex and richly imaginative music in which an almost romantic sensibility seems to radiate through a thoroughly contemporary surface.”

“ . . . stretches the listeners’ ears and imaginations”

“… Mumford is a composer to watch.”